Home beauty If You Have Oily Skin, You NEED This - Cathy Doll Oil Control Film Pact

If You Have Oily Skin, You NEED This - Cathy Doll Oil Control Film Pact 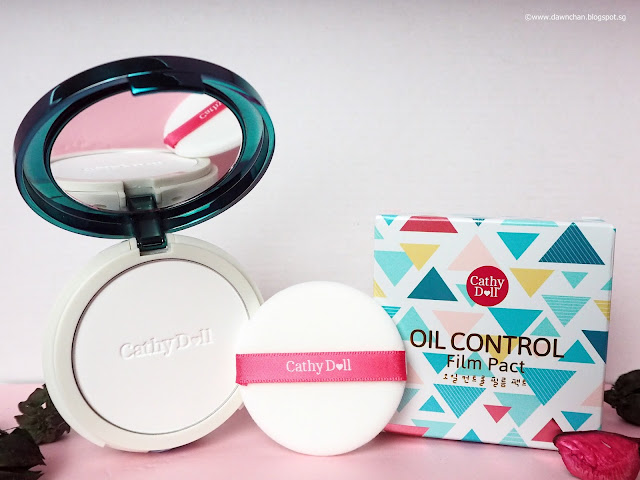 With a weather like Singapore, it is impossible not to have a greasy-looking face as long as you combination/oily skin. If you are a guy, it is even worse because guys tend to have even oilier skin. It was only until I tried Cathy Doll newest addition the family - Cathy Doll Oil Control Film Pact, that I realized that this multi-functional product could be so handy! 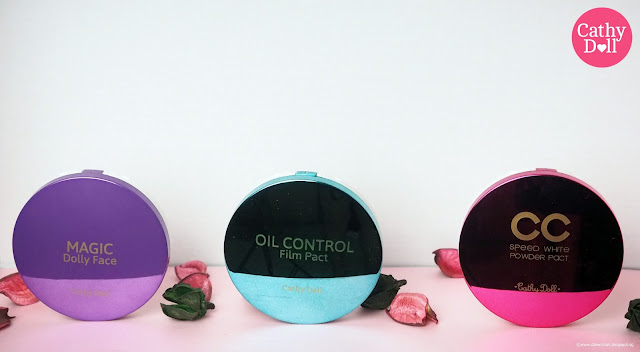 My first impression of this product is that it looks so similar to the other products from Cathy Doll - CC Powder Pact & Magic Dolly Face Two Way Cake Powder - and that caused me some confusion. It was then I read the packaging and realized that the Oil Control Film Pact sole purpose is just to control and counter oil. Hmm, let's put this to the test! 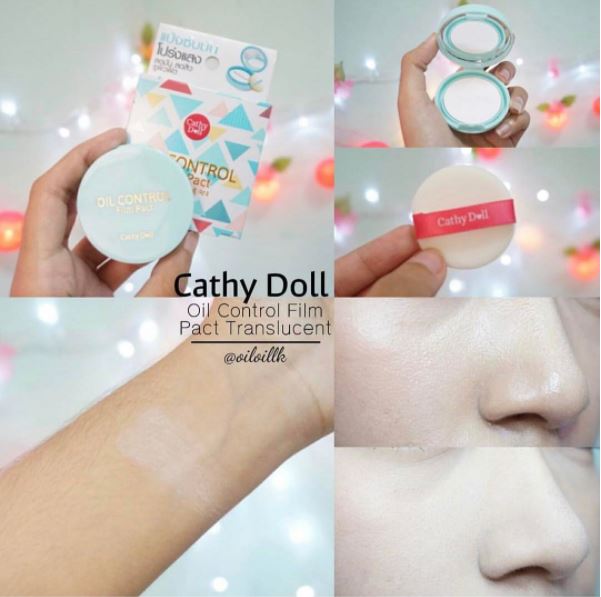 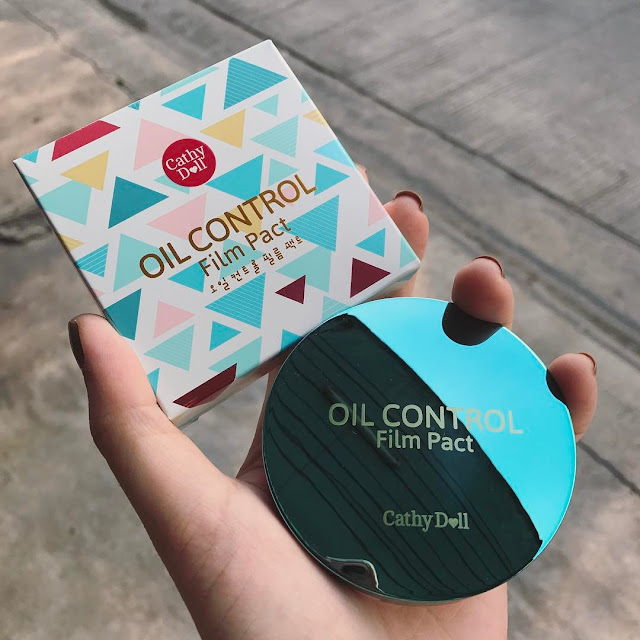 The lightweight and non-clogging formula also makes it easier to apply makeup and helps makeup last a lot longer, while the unique blurring technology built upon extremely rounded particles help soothe out any appearance of scars and uneven skin surface. I can't wait, let's try it now! 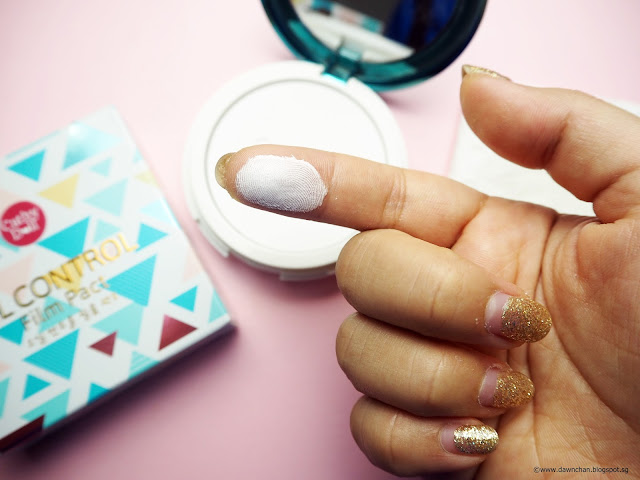 I rubbed the powder pact and I was quite surprised to see this white patch. At first, I was quite worried that it might leave a white patches on my face, or it would caused my face to be as white as this. (perhaps looking like an ancient geisha?) So I gently applied it on the back of my hand, and viola- it disappeared. 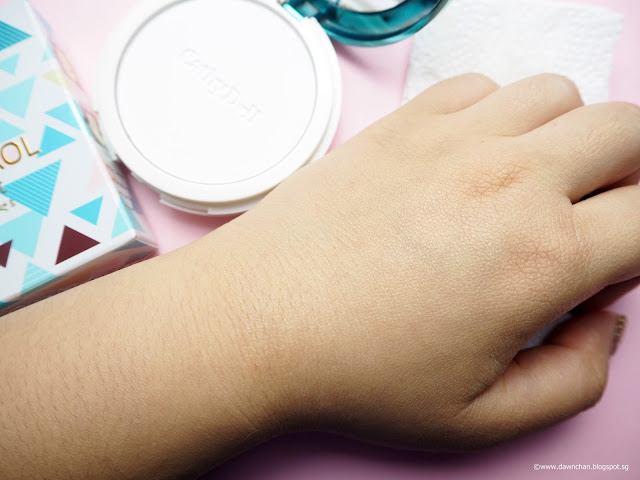 OMG! My skin felt really, really smooth after application. It felt unbelievable, like magic. No joke, you guys really have to try it. I also tried it on Mr Pig's super oily face, (he has acne problems as well) & he is blown by the results of Cathy Doll Oil Control Film Pact!

To prove that it is the exact same person, you can see the acne spots marked in red circles. You can see the huge difference in the skin! The light no longer reflects the oily nose area and instead give a soft reflection to the skin as a whole. It's amazing. You can even see the it lightens the acne spots marked in green circles. Overall, the PORES are visibly GONE! It's amazing. 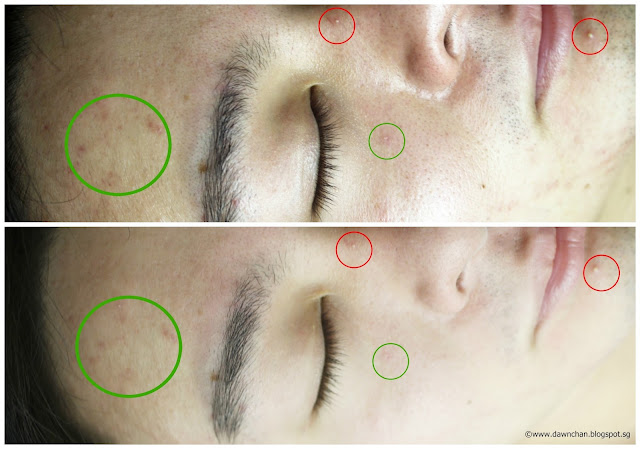 I decided to take a step further and POURED rice bran oil (used for cooking) on my arm. Cathy Doll Oil Control Film Pact did worked well for men's oily skin, but, YES, I wanted to test the limit of this product and see how well it could perform. I had to sacrifice my skin for the greater good. (lol) You can see my whole arm being all gross & shiny due to the oil. 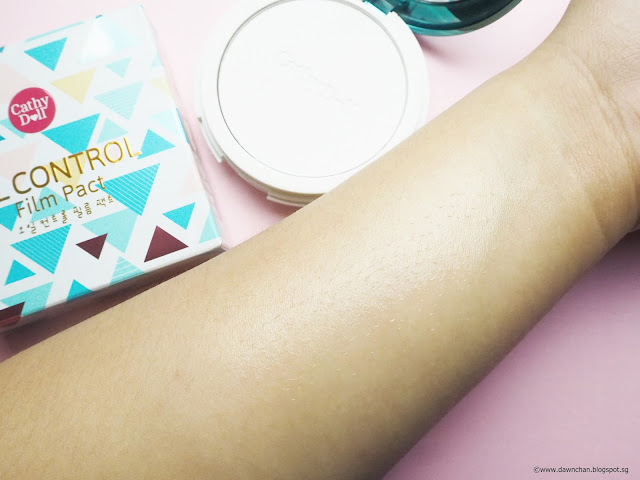 After applying the oil control film pact, the area became matte after just 2 layers, and it became as smooth as a baby backside once I went on to cover 3 layers of the film pact. #smoothAF 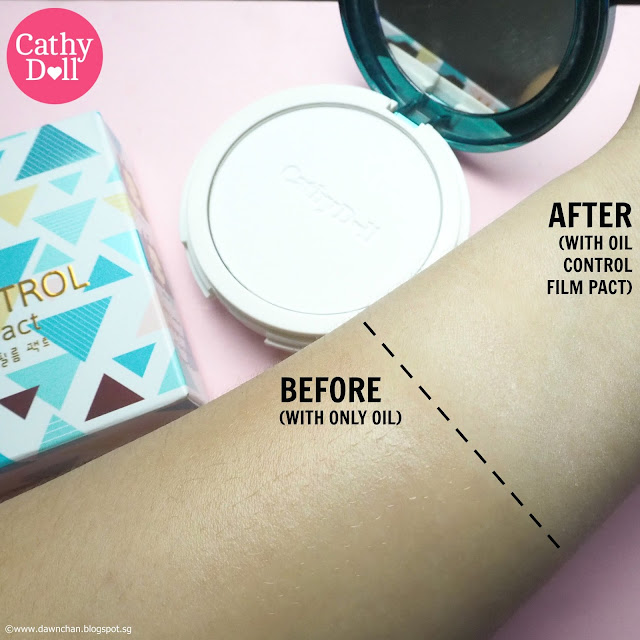 I didn't have blotting paper to prove that it was indeed matte, so I decided to use water instead. I dripped a few drips of water on my arm. As you all know, water and oil doesn't mix together (science lab experiments) hence the water stayed on my arm. However, most  of the water that touches the part with Cathy Doll Oil Control Film Pact just rolled off like how a rain droplet roll down a car window pane. 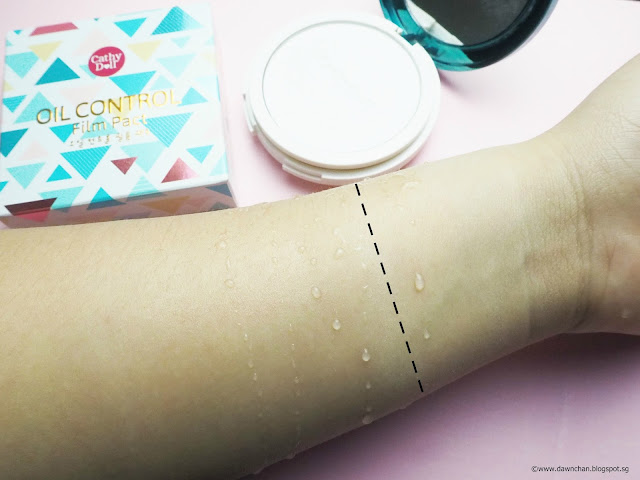 So according to Karmart's official website, it states that there are actually 8 uses to Cathy Doll Oil Control Film Pact! Other than controlling oil and reducing pores, it fixes your makeup while giving your skin a beautiful finish. It reduces oil around your eye crease area, and can change your glossy type makeup into matte type. Surprisingly, it can even help to counter an oily hair scalp as well as your sweaty armpits! :O 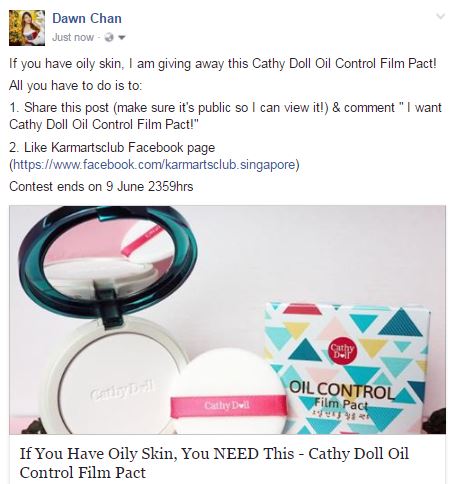 Cathy Doll Oil Control Film Pact ($16.90) will be available at BHG department store (ALT section Level 1) in Bugis around mid-June. They will also be available on Lazada, Shopee & Karmarts Website.

If You Have Oily Skin, You NEED This - Cathy Doll Oil Control Film Pact

Created with by BeautyTemplates | Distributed By Gooyaabi Templates